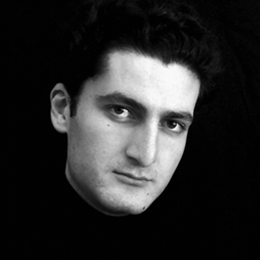 Demetre Gamsachurdia is a Swiss musician of Georgian descent currently living in Basel. He is a co-founder and member of the Delirium Ensemble.

„I believe he is an outstanding talent gifted with unusual profundity which he combines with great musical and emotional depth.“
Georg Friedrich Haas

As a co-founder and member of the Delirium Ensemble, established in 2016 by conductor and cellist Wiktor Kociuban, Demetre Gamsachurdia has dedicated many compositions to this group. Most recently, he completed his large scale musical theatre piece „Vikarë“, which was performed by the Ensemble in 2018 in both Poland and Switzerland.

The compositions of Demetre Gamsachurdia employ a variety of acoustically and electronically generated elements found in Ambient music, Noise, Trash, Heavy Metal, Ethno music and modern classical repertoire. Based on ancient Georgian vocal polyphony which is still practiced today, his music draws its roots from specific tunings and vibrations that allow the listener the opportunity to fully immerse in frequency and time as such, experiencing and exploring the phenomena of sound in both its rawness and pureness.

Influenced and inspired by meetings and workshops with Minas Borboudakis, Bernhard Lang, Stefano Gervasoni, Julio Barreto, Antonio Ballista, Sergey Koudriakov and Fred Frith, Demetre Gamsachurdia has been active in the field of contemporary musical composition and production, the performance of classical and modern solo and chamber piano literature, and instrumental improvisation as a soloist as well as in bands and groups.

Demetre Gamsachurdia’s composition „Karwa“ was commissioned and performed by the famous oboist, conductor and composer Heinz Holliger in Tbilisi, Georgia in 2018, and performed later in the same year in Geneva, Switzerland.

In coproduction with the DUX label and the Swiss Radio SRF2 Kultur, Demetre Gamsachurdia is, together with Wiktor Kociuban, the creator of “Oracle’s Blast” (2015), a project featuring five new works for cello and piano (Duo Kociuban/Gamsachurdia – Delirium Ensemble 2.0) composed especially for this purpose. According to critics, the recording is “of global importance”.

In 2013, Demetre Gamsachurdia founded „Shatterhand & Bushmill Orchestra“ together with percussionist Bastian Pfefferli. Over the years, the two-man band has performed a variety of virtuoso music theater pieces such as Vinko Globokar’s „Drama“ (2014) and „Cellule 75“ by Luc Ferrari (2016). Recently, the band is has been focusing heavily on improvisation and live electronics.

He has performed in many countries, including Georgia, Switzerland, France, Germany, Poland and China. His pieces have also been played in Italy, Austria, Russia and Brazil, as well as at both the Schwetzinger SWR Festspiele (performance of his composition „Zersidai“ as longtime student of Georg Friedrich Haas, 2013) and the Davos Festival (as „Young Composer“, performing his composition „Demiurgos“, 2013). He also played at the Codes Festival in Lublin, Poland in 2017, performing „Patterns in a Chromatic Field“ by Morton Feldman together with Wiktor Kociuban, presenting Delirium Ensemble 2.0.